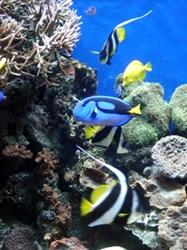 StartSmart is the Only Biological Product independently proven to instantly nitrify, which means to biologically Convert Ammonia to Nitrite to Nitrate.Use StartSmart for Fish Tank Maintenance. 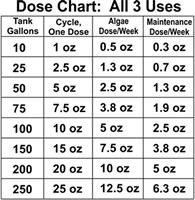 Check Out Our Blog to see HOW TO USE StartSmart

One of the biggest problems many hobbyists have is establishing the nitrogen cycle in a new aquarium. The problem is especially serious with first-time hobbyists. I am convinced that the most common reason new hobbyists fail at fishkeeping is that they don’t get their aquariums to properly cycle. TLC Products has taken a giant step toward solving the problem of getting the nitrogen cycle going with StartSmart live bacteria. Using StartSmart is an easy, effective way to get a new tank going. 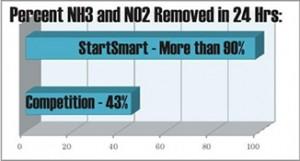 TLC claims that StartSmart instantly cycles new aquariums and that you can add fish immediately to a new tank after using StartSmart. They further claim that StartSmart will eliminate ammonia and nitrite in new aquariums. Fish Tank Aquarium Nitrifying Bacteria from Organic Earth Solutions LLC. 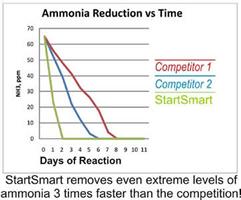 I filled a 20-gallon high halfway with newwater (conditioned to remove chlorine, chloramines and ammonia) and then filled it up with water from an existing tank. I set up an air-driven box filter with biological filtration media (some of the small commercially available concrete-like pellets) and a piece of floss on top of them for mechanical filtration. I added the specified dose of StartSmart and added the total fish
load. The fish consisted of four 3-inch-long orandas, four skunk cories and four 2-inch-long red-tailed black sharks. I monitored the water parameters every two days and kept a log of the readings. 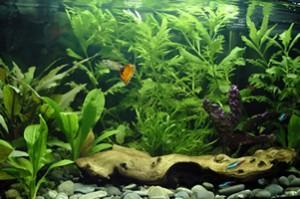 because they had converted them to nitrates). Nitrates peaked at around 50 for two days at the end of the first week and then leveled off at around 10. The delayed peak of nitrite is what I typically see using a filter media like I used, as it takes about a week for bacteria to become well-established in the media. The reason I use them is that they provide a living environment for the bacteria that convert nitrates into nitrogen gas.

During the two weeks, I did not lose any of the fish from the tank, and they were all healthy and active. The tank was crystal clear from the first day or so, which is a further indication that the bacteria of the nitrogen cycle were well-established.

StartSmart performed exactly as claimed by the manufacturer, and it provided the bacteria for the nitrogen cycle to work from the moment it was introduced into the tank. I especially like the fact that the StartSmart bacteria do not have to be refrigerated, so there is no problem with the product being shipped to stores or with it being on a store’s shelf before being sold. StartSmart could be used by anyone setting up a new tank – especially by folks who are starting their first tank. Getting the nitrogen cycle established is key to success with an aquarium, and StartSmart gets the cycle going. FAMA.