These improvements, though large and exciting in themselves, do not tell the full story. These numbers were calculated from the beginning through the end of a 90-day laboratory study. However, the results as taken over the last 30 days of the study were even more impressive in Bio Drain Cleaner’s favor.

This study was performed to demonstrate the superior efficacy of Bio Drain Cleaner in the septic tank environment. A key consideration was to design the laboratory system with the capacity to simulate some of the expected variations in load that are typical with real septic tanks.

After all, household septic tanks regularly receive large variances in flow, types of chemicals, pharmaceuticals, etc. To account for this, the experimental systems were designed for both continuous and intermittent effluent flow. To ensure that the study met standard scientific procedures, two parallel, identical systems were set up. This way, one would act as a test (treated with Bio Drain Cleaner), while the other would act as a control (without product added).

The dimensions of each of the main tanks (Stage 1 and Stage 2) was 38″x11″x11″, with a total volume of about 20 gallons. Two stages were used to act as a baffle (as you would have in a real septic tank) despite the small volumes involved. The intent was that Stage 1 would accumulate most of the solids, grease, and scum, while Stage 2 would be relatively free of solids accumulations.

Waste water was fed to the laboratory systems two ways: continuous and batch (intermittent). A peristaltic pump was used to continuously add 6 gallons of synthetic waste water per day to each system. Batch addition was performed by adding 3 gallons per day, twice per day, to Stage 1 of each laboratory system. With a total batch addition of 6 gallons per system per day (3 gallons twice per day), and with 6 gallons per day being fed to each system continuously, the total hydraulic load on each system was 12 gallons per day of synthetic waste water. The actual working volume of Stage 1 plus Stage 2 was 36 gallons, so that the hydraulic residence time was 3 days. This is very important, as we wanted to come reasonably close to the expected holding time of a residential septic tank. A residential tank with a volume of 500 to 1000 gallons may have anything from 1 to 5 days of residence time (depending on the number of people living at the residence and the rate of water use). Therefore, the experimental set-up did agood job of mimicking a real septic tank. The peristaltic pump used for continuous feed consisted of a single drive with two discharge lines. The pump is designed as a dual-feed, identical flow rate system. With this equipment, the test and control septic tanks received identical waste water flow each day.

Start Up: Septic Treatment System for Home and Commercial Use

To start the system up, each laboratory train was filled with 34 gallons of synthetic waste water (split between Stage 1 and 2). Two gallons of anaerobic digester sludge from a local waste water treatment plant (WWTP) was added to the 34 gallons of synthetic waste water. The mixture was undisturbed for three days to allow for initial degradation and acclimation. The purpose of the
anaerobic digester material from the WWTP was to establish a functioning biomass that would be found in a well-operating septic system. As septic tanks are mostly anaerobic systems (without oxygen), the sludge from a functioning anaerobic digester is ideal to start up a septic tank with full biochemical function.

After three days of acclimation, effluent feed was initiated. The peristaltic pumping system was used to add continuously at the rate of 6 gallons per day. Batch addition of 3 gallons per system, twice per day, was also started. The batch additions took place at around 8:00 A.M. and 5:00 P.M. each day. The total addition per day per system was therefore 12 gallons, giving a hydraulic resident time of 3 days.

Effluent from each system flowed to a refrigerated holding tank, so that 24-hour composite samples could be conveniently taken. At the end of each 24-hour period, the holding tank contents were blended to give uniform samples for testing. System influent and effluent were tested Monday through Friday for each of: Total Suspended Solids (TSS), Chemical Oxygen Demand (COD), and oil and Grease. Triplicate tests were performed according to standard methods for each of the parameters.

The chart below is a summary of effluent suspended solids vs. time for the test and control laboratory systems. The chart shows continuously improving performance on the Bio Drain and Septic Cleaner treated side: 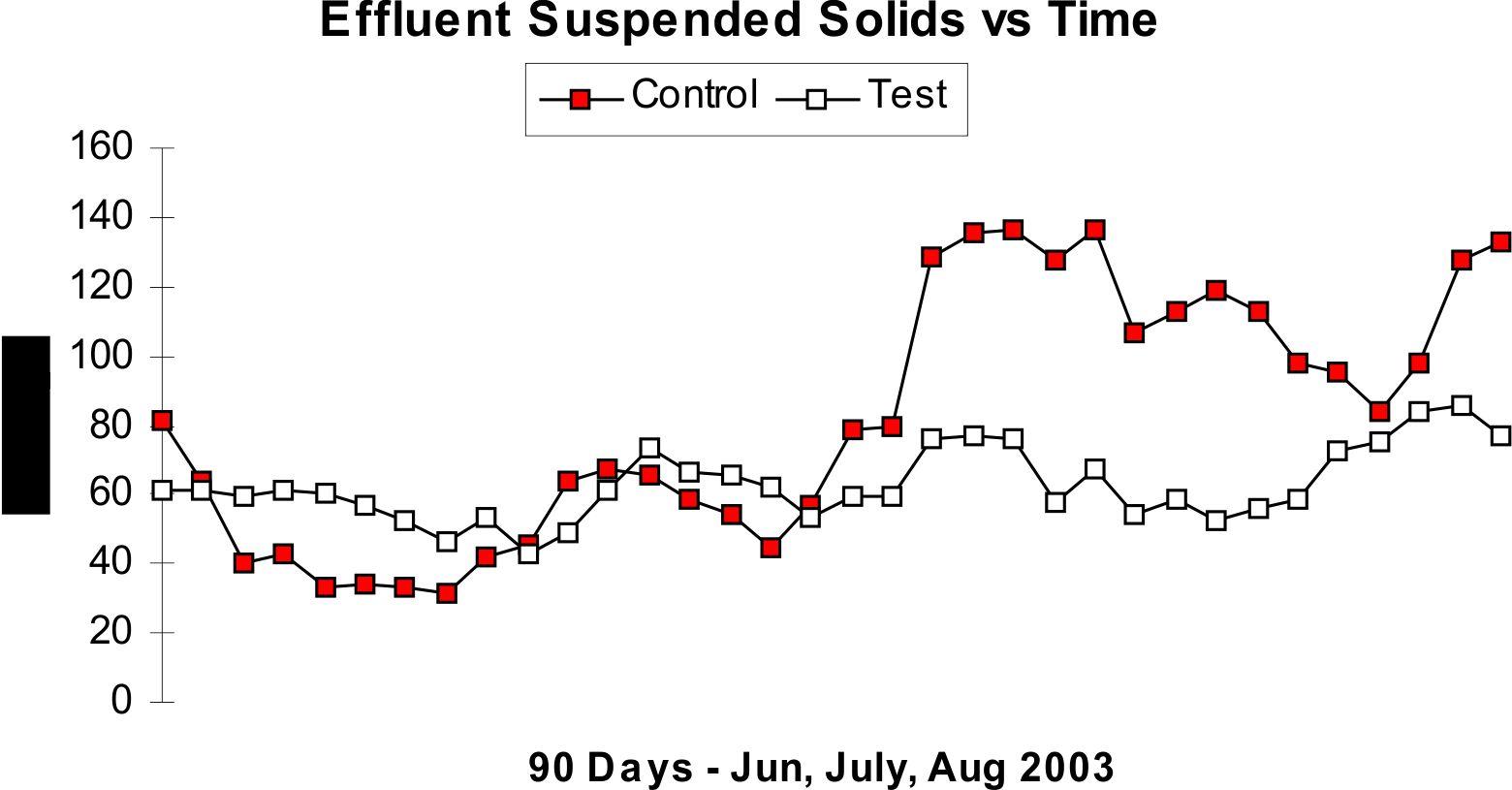 The next chart is a summary of effluent Total COD vs. time. As with effluent SS performance, the two sides (test and control) exhibited similar performance during the beginning of the run (the first 4 weeks). After that, it is 6 clear that the treated side continued to perform better and better compared to the untreated side. 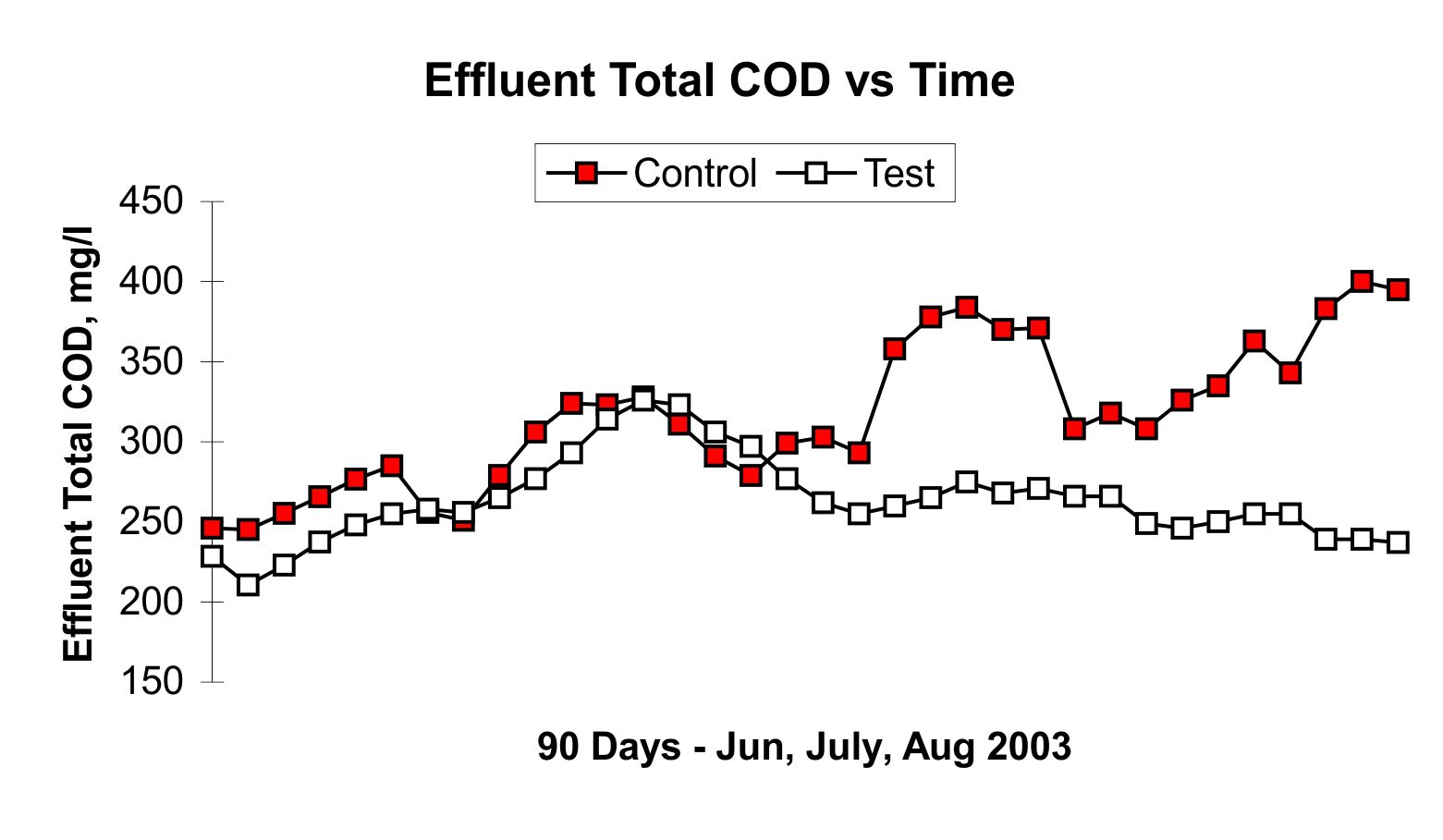 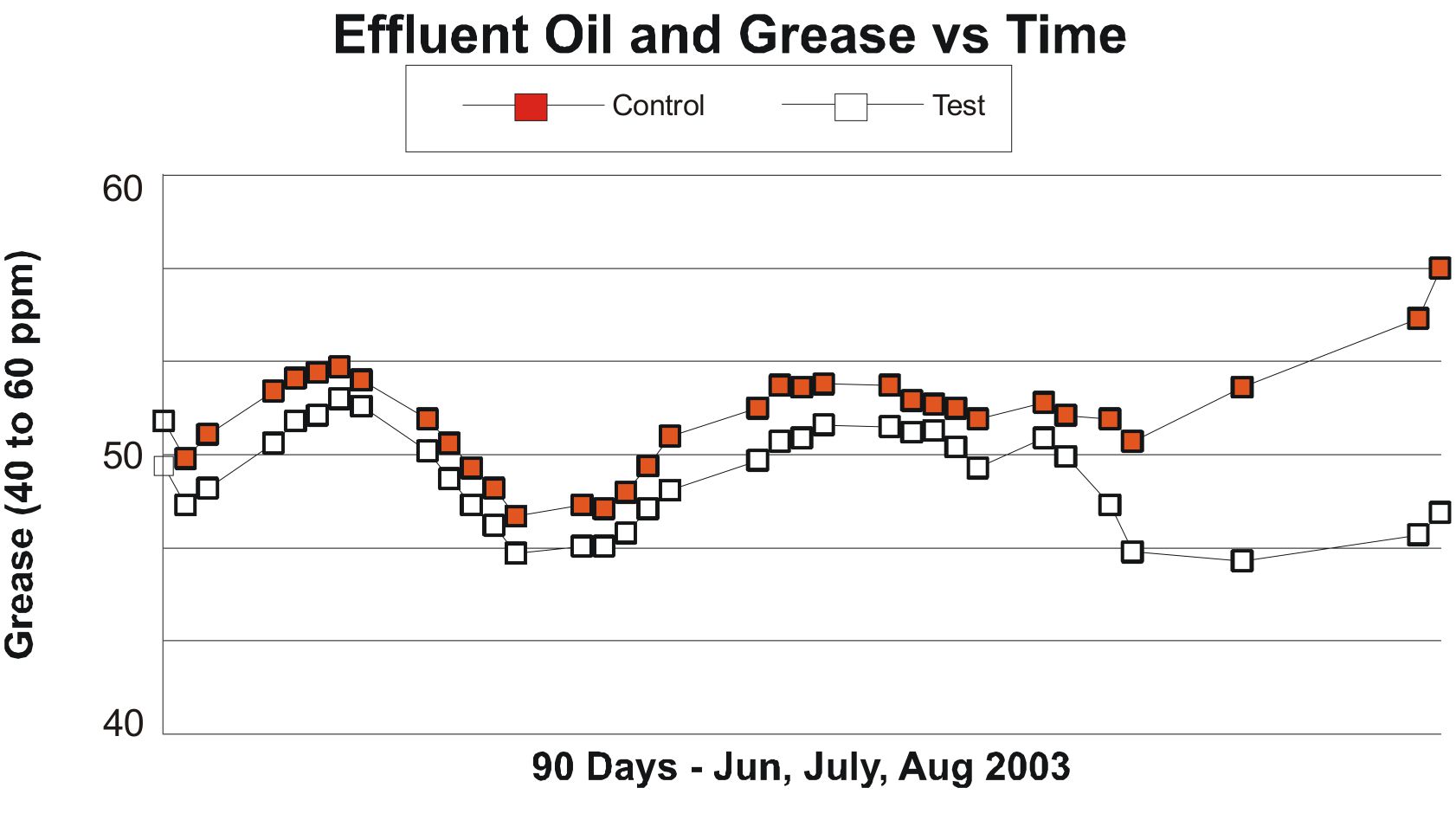